Blue Bird Travels assures you “Tour De Kochi” starts right at the moment from your arrival at Cochin International Airport (CIAL) or at the two Railway Stations – Ernakulam South and Ernakulam North.  Our stellar transportation management system ensures the perfect start for your vacation.

One day trip of Kochi will let you visit the iconic Fort Kochi, Legendary Hill Palace and lively shopping malls in Kochi.

Fort Kochi is unique with its cultural heritage and architectural beauty. The colonial era has contributed much of the buildings that we heed to in Fort Kochi. At every joint, you will see a mansion of some great historical significance. In these buildings, the most important decisions which defined the fate of a group of settlers in the princely state of Kochi were taken.

The main business communities of Kochi – Konkanis, Gujaratis, Punjabis, they are all settled in and around Mattancherry and Fort Kochi. This makes the place a melting pot of cultures.

Fort Kochi is a place best explored by walk.  This place is full of history, architecture, colonial remnants and a lot many cultures. Enjoying the sea breeze and walking through Fort Kochi is a satisfying experience. 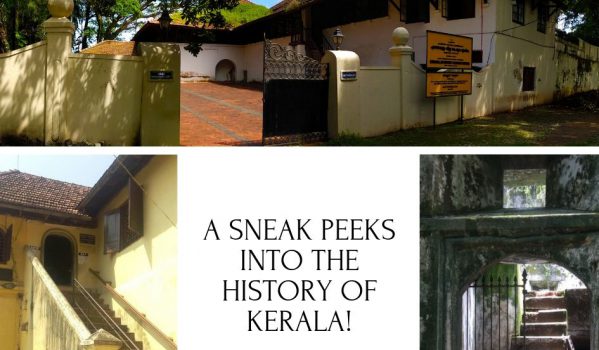 Emanuel Fort is a living testimony of friendship ties between the princely state of Kochi and Portuguese. Built in 1503 AD, Emanuel Fort was refurbished in 1538 AD.

This cemetery is in use since 1724 AD. Salute to scores of Europeans who set sail to hoist the flag of expansion all over the world by forming colonies and it was all for earning fame and fortune rewarded by the Kings and Clergy.

Thakur House was also known as Kunal and Hill Bungalow. The manager of the National Bank of India resided here under the British rule. The present owner of this building is Thakur and Company, famous Tea-dust producers.

The colonial mansion, David Hall was built in 1695 AD by Dutch East India Company. This building was closely connected with the Dutch Commander Hendrik van Rheede. He wrote the book Hortus Malabaricus that tells about the vivid flora and fauna of Kerala. Later this building got into the hands of David Koder and thus the name David Hall.

This place of divinity has got huge significance in the history of not just Kochi, but of Kerala and India also. This church was built by Portuguese in 1503 AD. Vasco Da Gama’s corpse was first entombed here before transferring it to Portugal. His memorial stone can still be found in the church.

By the Church road, you will find the famous Cochin Club. It has a good library and a well-maintained garden. It takes you back to the British Colonial era.

In the Church road lane, another building inviting your attention is Bastion Bungalow. This huge building flaunts Indo-European Architectural excellence. Presently, it is the residence of the Collector of Kochi.

Near to Bastion Bungalow, there is Vasco Da Gama square. It is a great experience to walk carelessly and enjoy the street food delicacies at this place.

Chinese fishing nets were introduced to Kochi by traders from Kublai Khan’s empire. The princely state of Kochi has good trade relations with even farthest empires of the world even with China.

It was built in 1808 AD by then famous Tea brokers Carrit Moran. In the same year, another beautiful building was built by Samuel S Koder of Cochin Electric Company, Koder house. All these buildings present us a remarkable combination of Colonial and Indo-European architecture.

There are hotels and restaurants which serve the best delicacies that only this tourist destination in Kerala is home to. It is much different from what you experience in other places to visit in Kerala. One of the oldest street it is, lined by European style houses on both sides, it’s simply great to walk through. On the same street, you can find Loafer’s Corner.

Head south from Loafer’s Corner and there is Santa Cruz Basilica. Built by Portuguese, in 1558 AD, Pope Paul IV Promoted it to Cathedral status. In 1984, Pope John Paul II declared it a Basilica. Now, off to Burger Street and there you will see Delta Study Center, now it’s a High School and you will reach Rose Street via Princess Street itself. In Rose Street, there is Vasco house, the stay of Vasco Da Gama. It is one of the oldest Portuguese houses in Kochi.

VOC Gate is in Ridsdale Road. It’s a wooden gate opposite to Parade ground built by Dutch in 1740 AD. It bears Dutch East Company emblem. United Club is near by. Once a popular joint among high profile Britishers in Kochi. Currently, it is used as a classroom of St. Francis primary school.

It is located near Thripunithura, Kochi near Karingachira. Hill Palace is the largest archaeological museum in Kerala. It was built in 1865 by the Maharaja of Kochi. It housed the administrative offices and residential building spread across 49 buildings in the same compound. The main attractions are archeological museum, deer park, pre-historic park and children’s park. Several rare species of medicinal plants are grown there. The museum is under the authority of The Kerala State Archeology Department.

Marine Drive is a popular hangout for local people as well as travelers to Kochi. It presents you with a picturesque promenade facing the backwaters of Kochi. It has a walkway of about 3 kilometers.The backdrop of this place is the backwaters, with ships anchored at the harbor and that interests the tourists even more. The walkway is filled with people during the evening who visit the place to have the view of the sun setting over the calm sea. Rainbow Bridge is the latest addition to the beauty of this place and that attracts a lot of tourists. There is also a children’s park built near Marine Drive.

Lulu Mall – India’s largest shopping mall, Lulu is an attraction in its own right with people coming from all over to shop here, hang out in the food courts or cinema, go ice-skating or tenpin bowling. Sprawling over 7 hectares, this state-of-the-art air-con, the wi-fi-connected mall has more than 215 brand outlets from Calvin Klein to KFC. It’s in Edapally, about 9km from the Ernakulam boat jetty.

Niraamya – Popular throughout Kerala, Niraamaya sells ‘ayurvedic’ clothing and fabrics – all made of organic cotton, colored with natural herb dyes, or infused with Ayurvedic oils. There’s another branch in Mattancherry.

Centre Square Mall – In central Ernakulam, this flashy new mall is smaller than Lulu Mall in Edapally but still has six floors of shopping, including a top-floor food court and bowling alley, as well as a cinema.

Various Taxi packages available with us

The purpose is making your Kochi sightseeing tour as relaxing and exhilarating as possible. The different types of taxis available with us are:

Are you looking for something exclusive and completely tailored? Give us a call, and we are sure we can work up something. 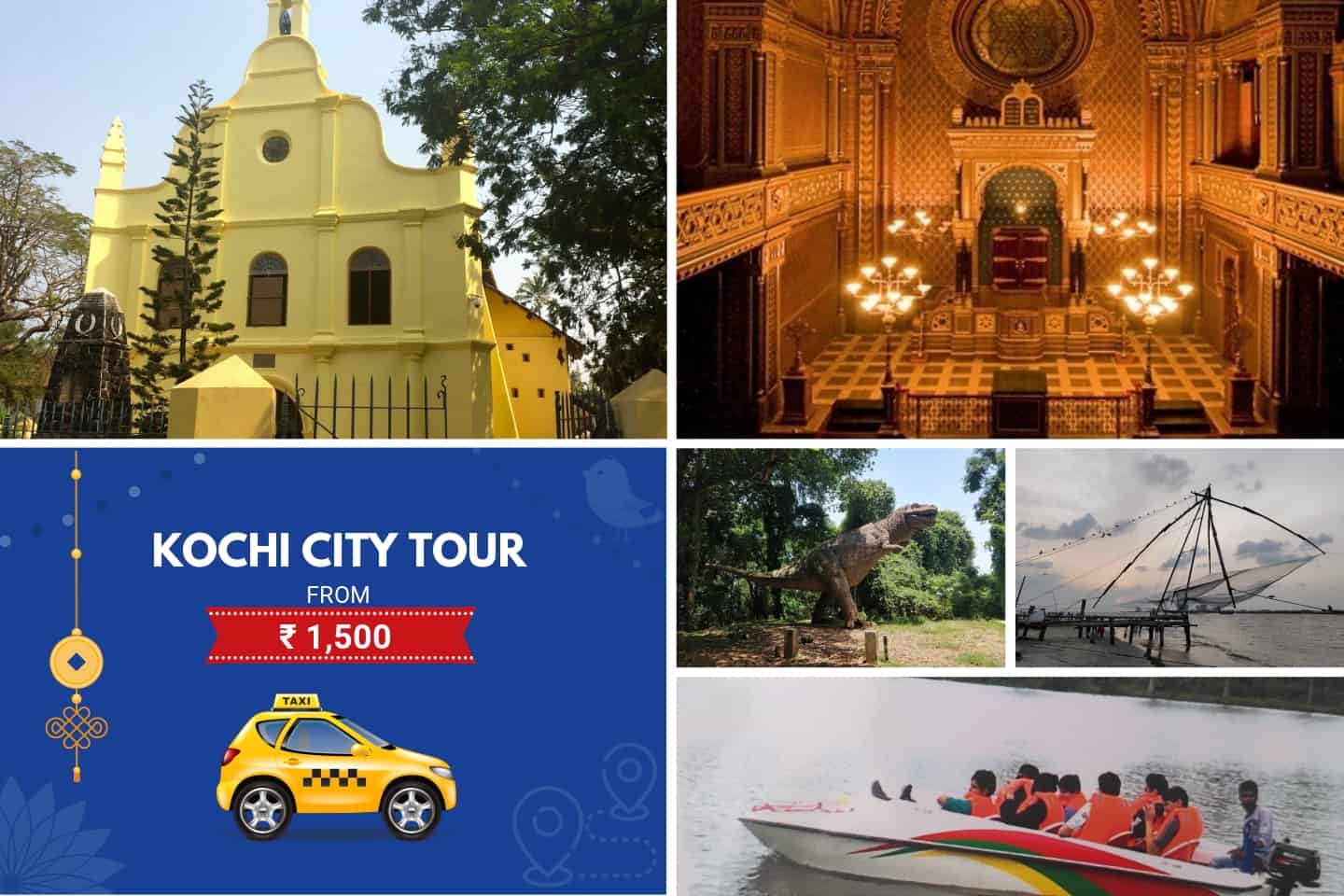 Was a great trip

Thanks, sir for your feedback. This will go a long way in keeping us motivated and do better. 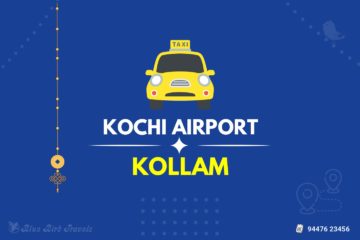 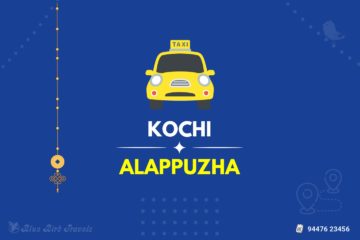 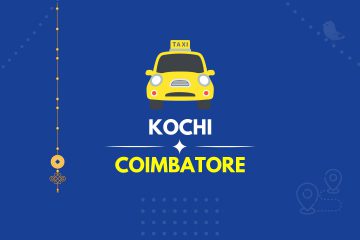