Kodungallur Bhagavathy temple or the  Sri Kurumba Bhagavathy temple in Kerala finds an essential place in the itinerary of every devotee who visits Kerala. One of the most ancient temples in Kerala, the temple is dedicated to a dominant form of Shakti – Goddess Bhadrakali. The sacred temple is one of the most powerful Shakti peethas in Kerala and is known as the abode of Kannaki – the incarnation of Goddess Kali.

An aura of mystery shrouds Kodungallur Bhagavathy temple! The phenomenal powers of the temple are believed to be residing in the five Sri Chakras installed by none other than Adi Shankaracharya himself! A fascinating aspect of this temple is that it is believed that the puja or rituals are conducted under the instructions of the Goddess herself.

The temple is significant as one of the first temples in Kerala which permitted entry to devotees belonging to the lower strata of the caste hierarchy into the temple premises even when other temples barred their entry around the year.

There are many legends associated with Kodungallur Bhagavathy temple. One of the legends is that Parashurama, an incarnation of Lord Vishnu, built the first structure of the temple to make his people more prosperous.

A demon called Daruka harassed lord Parashurama & he prayed to Lord Shiva who advised him to construct this temple. Parashurama installed the idol of Bhagavathy as the Shakti Devi alongside the deity of Shiva. Bhagavathy as the fierce Bhadrakali killed the Demon Daruka and saved Parasurama and his people.

The other legend mentions that Parashurama had a vision of the Bhagavathy around 1 km south of the present temple and he worshipped her as Durga offering liquor and chicken.  He then shifted the idol of Kurumba Amma found there to the current temple site.

A legend believed by the people of Kodungallur is that the ancient shrine was once a temple of Shiva and sage Parasurama installed an idol of Bhadrakali alongside that of Shiva. The Lord of the temple is Lord Shiva.

The history of the Kodungallur Devi temple dates back to the Chera period. The famous Chera King is said to have built the temple for Kannaki – the heroine of Silappathikaram, a Tamil classic by Ilango Adigal.   Her husband was falsely implicated in the theft of royal jewels and then killed by the royal guards. She was a devotee of Bhadrakali, and while praying to her at Kodungallur, she attained moksha & merged with the idol of the Goddess. Kannaki is also considered as a manifestation of Kali Durga.

The temple is in the midst of about 10 acres of land which was once surrounded by Banyan and Peepal trees. Built in typical Kerala style architecture, there are a lot of secret paths and chambers in the temple. A secret underground room with no doors & windows to the east of the Kali image is the ‘Sakthi Kendra’ (center of power) of the temple. The granite chamber can be entered only through the door from inside the sanctum which has never been opened to date.

The presiding deity of the temple is Bhagavathy or Kali. The idol is carved out of a Jack fruit tree and is six feet high. The idol has eight arms and carries weapons and symbols like the sword, spear, discus, pestle, bow, etc in each hand & the severed head of Darikasura by the hair stands facing north. The head is adorned with a crown that resembles the headpiece of a Kathakali actor. The body is totally covered with golden attire made of chains woven out of gold discs, necklaces, etc. The goddess is shown in her fierce form as the destroyer of evils. A cloth hung on the western wall of the sanctum serves as a symbol of the deity, and is worshipped by the devotees.

Kannaki, the heroine of Silappathikaram has a separate shrine inside the temple. The Pallival (sword) and Chilanka (leg ornament) of the goddess are worshipped in the Pallimada Shetram.

Lord Ganesha, Ksetrapala, Mahameru, Adishankara, Vasurimala, Lord Veerabhadra and the Sapthamatrukas (seven mothers) are the other deities of Kodungallur Bhagavathy temple. It is said that Lord Parasurama himself established the idol of Mahameru, Adishankara which faces to the east & the absence of Nandi (Shiva’s bull vehicle) cannot be seen in any other Shiva temple in any part of the world.

The Kodungallur Devi Temple has idols of Sapthamatrukas in a sitting posture facing north in the western chamber of the inner temple. The twelve feet high Kshetrapala idols made of stone, which are rare in a Devi temple stand outside in the courtyard. A deity which wards off diseases like Smallpox, Vasurimala is enshrined in the Devi temple. The idols of Ganapathi & Veerabhadra facing two directions are in the same chamber. The Kozhikkallu stones where cocks were offered to the Bhagavathy are at the eastern & Northern gate.

Two very important festivals are celebrated in the temple. 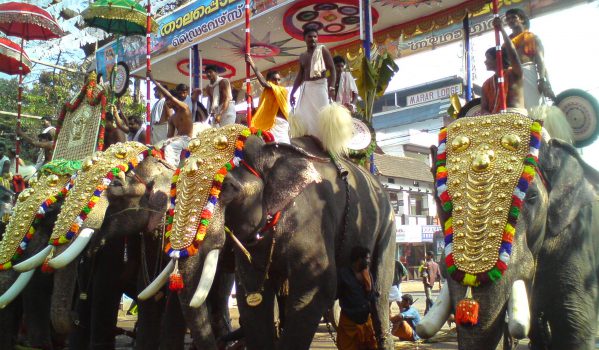 Goddess Bhadrakali’s win over the demon Daruka is celebrated as the Bharani Festival, is a very colorful festival held in the Malayalam month Meenam. On this very day, it is believed Goddess Kali, and her dependants celebrate & feast in blood. The Bharani festival starts with the ritual ‘Kozhikkallu moodal.’ Men & women as a large group of ‘Velichappadu’ (oracles), assemble to participate in this wonderful festival wherein they pollute the temple. It is believed pilgrimages to the temple during the Bharani festival will safeguard the pilgrims from severe attacks of Cholera and Smallpox. 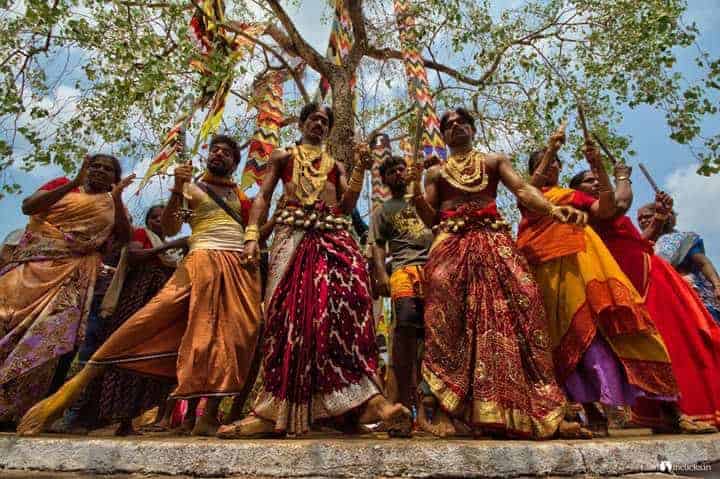 Held in December-January, coinciding with Pongal (festival in Tamil Nadu), the festival lasts for four days. A massive gathering of women clad in the traditional attire participates in this festival.

Entry to the Temple is restricted to Hindus only.

Kodungallur Bhagavathy Temple is situated in Kodungallur, Thrissur district, Kerala. The historical town of Kodungalloor was once known as Muziris, an ancient port of Kerala and a very significant city on the old trade route. Roads well connect it with major towns in Kerala.

By Air: Cochin International Airport is just 27 km away

By Bus: Kodungallur bus stand is 1.5 km away

Read on: Thiruvanchikulam Temple &#8211; The only Thevaram Paadal Petra Shiva Sthalam in Kerala

Situated at Thriprayar, at about 15 km from Kodungallur, the Thriprayar Sri Rama temple has Lord Rama as the presiding deity of this temple. It is also believed that this idol is a representation of the Holy Trinity – Lord Brahma, Lord Vishnu, and Lord Shiva. The temple has a significant role in the famous Arattupuzha Pooram celebration.