With Blue Bird Travels taxi cab services, your pilgrimage to Sabarimala temple will be comfortable, convenient, and purposeful – right from the railway station/airport to the base camp, and back.

Here we explain in detail the various Cochin to Sabarimala taxi packages that are available with us. We understand that your visit to the ancient and one of the holiest Hindu temples isn’t just a journey; this is a journey replete with tradition, respect, spirituality, and even salvation. Although there are bus services available from the Ernakulam Railway Station and Kochi Airport to Sabarimala, it is much more convenient to hire a taxi or a cab service because it gives you the independence of visiting various other temples that you come across on your way to Sabarimala.

You will read about:

Best deals for you 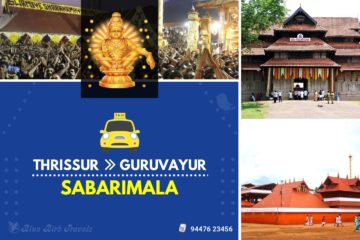 Some details about the Sabarimala temple – history, tradition, location and distance from Cochin 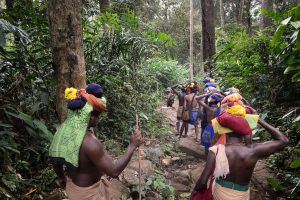 Surrounded by the dense forest that is now called the Periyar Tiger Reserve, around 17-50 million devotees take a trip to Sabarimala annually. The temple hosts one of the most revered deities, Lord Ayyappa. It attracts pilgrims not just from Kerala, Tamil Nadu, Karnataka and Andhra Pradesh, but also from other parts of the country, and even from all over the world. The doors to the temple are opened only during the days of Mandalapooja in November-December, Makara Sankranti on January 14 and Maha Vishuva Sankranti on April 14, and the first five days of each Malayalam month.

The known history of the temple goes back to the 12th century, but it was built three centuries before that. The temple remained unreachable for 300 years after it was built. Then, a prince from the Pandalam Dynasty, Manikandan, discovered the path to reach Sabarimala. The prince meditated in the temple and attained divinity. He was considered to be the Avatar (incarnation) of Lord Ayappa.

The name of the temple Sabarimala also has its roots in mythology or history that go back to thousands of years. It is believed that when Lord Ram and his brother Laxman were wandering from forest to forest in search of Sita after the demon king, Rawan abducted her, they came across Shabri. She was a tribal woman living in a hermitage set up by Sage Matanga. She fed Lord Ram fruits after sampling them, and despite being a tribal (a lower caste during those times), Lord Ram gladly ate the fruits first tasted by her. Many people believe that Sabarimala derives its name from Shabri, but various versions are available.

The temple is on a hilltop at an altitude of 1574 feet above the sea level.  Mountains and dense forests surround it. The forest around Sabarimala temple is known as Poongavanam (Periyar Tiger Reserve). Various other temples are existing on the surrounding hills, but this is the most prominent temple with such veneration that even people from different religions visit the temple to seek the blessings of the Lord. One has to follow a Vratham – a fast of 41 days – before one can visit the Sabarimala temple.

Pilgrims visit the temple in groups of 4-50 under the guidance of a leader called Guru Swami. A Guru Swami is usually an older adult who may have visited the Sabarimala temple multiple times and is also familiar with the practices that need to be followed to get the full blessings of the presiding deity.

The devotees typically reach the Pamba base station through various means including taxi and cab services, and after that, there is a 5 km trek to the hilltop where the temple is situated. Recently the base camp has been shifted. In 2018, during the annual pilgrimage season, the base camp was changed to Nilakkal which is 17 km from the old base camp Pamba. Whether it is Nilakkal or Pamba or somewhere else near the Sabarimala temple, the distance can be easily covered if you have hired yourself a Cochin to Sabarimala taxi service.

Unique, pure ghee is offered to Lord Ayappa, and during the trek, this offering is carried over the head wrapped in a handwoven cloth.

From the Cochin railway station (prevalently known as Ernakulam Railway Station) Sabarimala is about 140 km. The taxi drive takes about 5 hours.

From Kochi Airport, which is around 155 km from Sabarimala, the taxi service takes around 5 hours.

How to reach the Sabarimala base camp (normally Pamba) from Cochin? 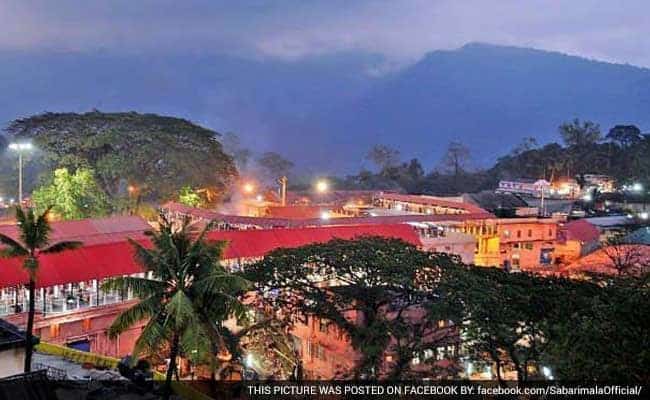 There are multiple options available to you, including a bus service, private transport services and of course, our Cochin to Sabarimala taxi package. It is a comfortable journey if you get a taxi package. We also provide coaches and tempos if you have a considerable group travelling with you. There are also options available for 4-6 passengers. Aside from visiting various temples on your way to Sabarimala, you can make stops at multiple restaurants and coffee houses. There are petrol pumps from Bharat Petroleum, Reliance and Indian Oil. On your way, there are several ATMs and hospitals, just in case.

You can get a taxi package to Sabarimala from two prominent locations during your pilgrimage: from the railway station and the airport.

Book your Taxi for Sabarimala pilgrimage on our website. The taxi will be waiting for you with a driver that is fully aware of the itinerary and the number of temples existing along the way. We can also arrange multiple taxis if you are travelling with a bigger group.

The way to the Sabarimala temple is dotted with many more temples en route. When you take a taxi cab from the Cochin Railway Station to Sabarimala you can pay obeisance to the following temples:

The taxi packages from Cochin to Sabarimala come in the following dimensions.

Different Cochin to Sabarimala taxi packages available with us

We know that you want to have a memorable pilgrimage to one of the most prominent Hindu shrines with a long-standing history. You want to get the blessings of Lord Ayappa and also want to pay obeisance to other temples around the main temple. For this reason, we have formulated our taxi packages for maximum convenience. You can also get completely tailored taxi packages from Cochin to Sabarimala.

Amrit Hallan
Previous postWonderla Kochi – The magical world of fun that amazes you!
Next postWaterfalls in Kochi